Nat Robinson, Co-Founder & CEO
One hundred days of genocide in 1994 left an estimated 2,000,000 Rwandans adrift with no place to call home. Now a large host to refugees, Rwanda is uniquely positioned to understand and address the refugee crisis with technology. Refugees face adversity along every step of their journey—often plagued by theft, corruption, and natural disaster even after being forced to flee—distorting identity and diminishing hope.

This scenario affects the 68.5 million refugees across the world who often lose access to their life’s savings in addition to their economic identity. Another 100 million people live at risk of becoming refugees. Leaf Global Fintech, a new blockchain innovator, aims to intervene in order to provide economic security to the stateless and excluded. The company envisions enabling refugees to safely store and transport assets across borders. By facilitating crucially-important access to financial services anywhere, Leaf paves the way for refugees to retain their economic identity and travel without the risk of carrying cash. Financial security creates peace of mind and a better chance of success in a new country.

The company facilitates affordable financial services for refugees by converting mobile money into stable investments and linking identity across borders using biometrics. DLT enables unprecedented security, transparency, and affordable, fast transactions. Leaf’s platform is accessible on a mobile device—not necessarily a smartphone—using simple SMS messages. Both the SMS interface and a web-based platform allow refugees to check account details, transfer money, and initiate transactions like withdrawal into a new local currency once at a point of safety. 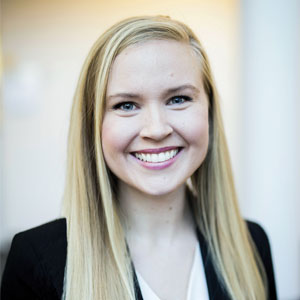 Tori Samples, Co-Founder & CTO
Alongside these functionalities, friends and families can also contribute into a refugee’s account. Unlike expensive money transfer services that require physical cash pickup within a few days, Leaf can offer the same services efficiently and affordably, straight to a mobile device.

The organization intends to achieve its goal of accessible finance by using a partnership model to bolster speed-to-market and regulatory compliance. “Partnerships with financial institutions and mobile money providers will enable us to tap into the market at a faster pace, as the required infrastructure and networks already exist,” states Nat Robinson, the Co-Founder and CEO of Leaf Global Fintech.

After conducting a pilot at one of the world’s busiest border crossings between Rwanda and the Democratic Republic of the Congo, Leaf received positive market response in addition to demonstrating technical capability with test transactions. They will soon build additional features like multi-language functionality into the existing platform in order to enhance customer experience.

Leaf intends to expand into areas like Colombia, Venezuela, Myanmar, and the Middle East where refugees and migrants face similar challenges. The company’s next steps include continued development of its technology, formalizing partnerships, and proving regulatory compliance. “Our technology will enable not only refugees but also the two billion people around the world without access to formal financial services to experience a new way of performing their transactions,” adds Robinson. The combination of the Leaf team’s passion and technological intelligence is bound to craft a path to success for struggling refugees.